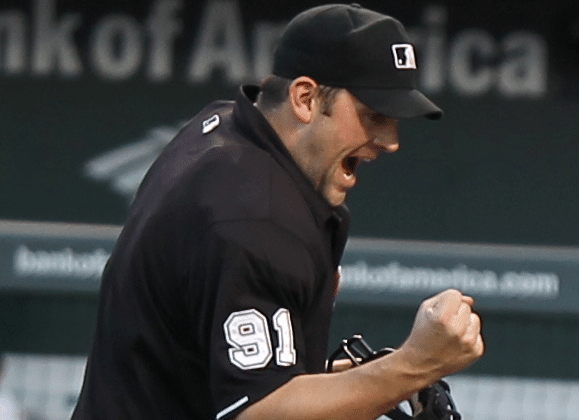 I knew a guy who was one of the world’s foremost authorities on the Soviet military. This man had credentials like no one else. Oxford educated, tons of awards and recognition, and he operated in the very highest circles.

The thing is, he stank. And I mean that literally.

I suppose he had some reason why he never bathed, but he never bathed. The result was you could not stand closer than about 3 feet and not be repulsed, even when he was wearing a suit jacket.

I knew him like 30 years ago, and he truly was a world-class expert at what he did. But the strongest memory I have of him is of his…aroma. Kind of unfortunate, right? Which makes me ask:

What might you be ignoring right now, that is having a negative effect on your customers and prospects?

In this article, I will describe four things that can make you smell to high heaven with your audience—and the chances are excellent that you don’t even know it.

You think I jest? You think you’re different? I defy you to tell me that you were aware of all these situations, and were not doing any of them.

Think about that one. We’ve been talking (or I’ve been reading your material) for a while and suddenly you’re telling me that you are switching to a different, honest mode?

You might as well say: “I’ll stop being dishonest for a moment…”

I realize that the term is so frequently used that it’s often a meaningless placeholder, the way “having said that” most definitely is. I also realize that “to be honest” sometimes means other things. If that’s the case, then say those other things instead! For example you might mean to say:

You’ll be more accurately stating your feelings, and won’t be calling into question all the other things you have said.

Strike Two: “If you’re not satisfied…”

With most online guarantees you come across, you can pretty much count on seeing three things:

I’ll describe by way of analogy: Let’s say you’re planning a trip and you visit the site of your favorite airline. They have a banner at the top of their site that says: 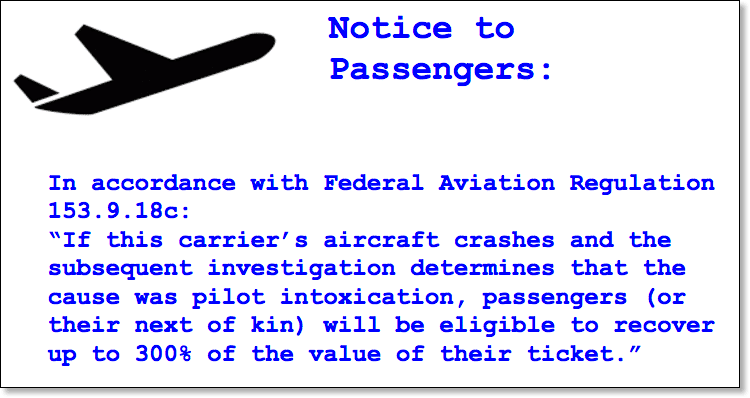 What’s going to be your reaction to that notice? Might it possibly be:

Well if that’s the case, why then do you phrase your own guarantee negatively?

Look at these examples from the wild: 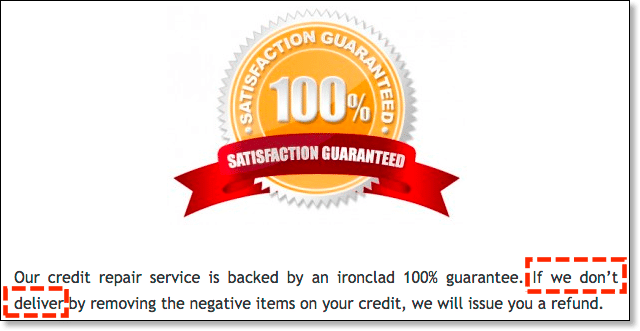 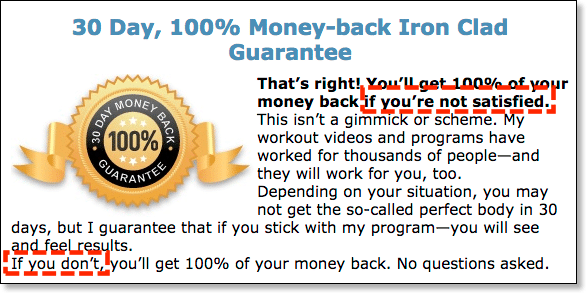 These companies inject into the minds of prospects the very thing they want to guarantee against.

I can hear a critic saying: “Oh, that’s ridiculous to pretend that everything will always be great.”

By phrasing it positively, we are pretending nothing of the sort. If everything always was perfect, there would be no need for a guarantee. We want them to know that we have them covered in case there is a problem. It’s simply a matter of positioning the guarantee as a comforting factor, rather than a discomforting one.

Plus it’s so easy to re-word them, once you’re aware of the issue:

You can even amplify the guarantee with more than one expected benefit:

Let your competitors continue to wallow in the negativity their guarantees deliver.

I just shake my head at this one. Businesspeople having a vague goal of what they want to accomplish and mis-using a tool (the English language) to do it.

What they mean to say is: “We have helped lots of people in similar situations.”

What they actually say is:

“We’re LegalZoom, and we’ve helped over a million people just like you start their own businesses.”

You can see other examples here and here.

Think about the message these businesses are sending: “We regard you as a cookie-cutter stamped-out statistic, and not as an individual human being. You’re a number to us in a report, a blob of visitors, and you kinda all look the same, to be honest.”  🙂

They would deny that, and maybe not even consciously think that, but the core meaning is clear.

When people do too much spreadsheet-looking and too little actual contact with customers, is it any wonder that all their customers look “just like” one another?

The truth is that your customers think quite the opposite: Most people walk around with their Excuse Shield set to maximum; they are certain that their situation is completely unique, even when often it is not:

No one is exactly like anyone else. It’s fine to say: “If you are suffering from migraines” but it is a whole different thing to say: “Other migraine sufferers just like you.” The first statement is focused on the single issue of migraines. The second mistakenly assumes that everyone is “just like” Flo Martin, a 42-year-old woman who has one kid, is divorced, and works at the East Sandusky Walmart in the toy department. There is no one else in the entire world just like Flo. She looks to her left and right and knows it. With your statement, you’ve made it clear to her that you do not.

Don’t immediately give people a reason to take issue with your statement. You are disengaging your audience because the very first thing you’re saying is something they can take issue with. It’s the opposite of the proven sales technique that says you want to get people agreeing to small things at the beginning, so they’re more like to agree to large ones later.

Strike Four and You’re So Very Out: “Some of you”

Here’s the Big One.

Lots of things in life are gray areas. This one is not: You are either addressing people in a group, or you are addressing them individually.

You can NOT go through a single day without hearing at least one of the following:

When you’re trying to persuade people individually, do not address them as one big blob.

Clients may not even notice on a conscious level; they may just conclude that there’s something about you that’s less personable, or they feel less connected to you.

Yes it’s a fiction but then again we’re trying to rise above the noise, right? We want our message to get through, be read, and be acted upon.

Lots of stuff is fiction but we want to transcend the fiction. In fact, that’s what good novelists do: You know you’re reading merely a story, but you want to get into it. Imagine if in the middle of the thriller by John Grisham, a lazy editor left in stuff like “John, this scene is pretty good, but it kind of drags at the end. Can you shorten?” The mood is blown. Can you eventually recover as a reader? Yes. Did it ruin the book? Maybe not. Is it inferior to a book with no mistakes? Yes.

Take a look at how this person addresses her audience: 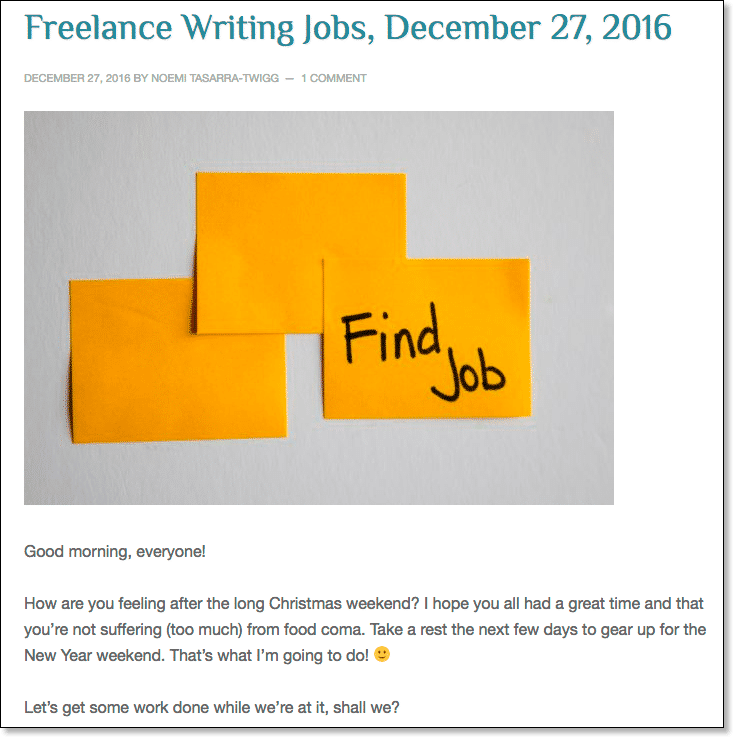 It’s pretty obvious what happened: She plopped into her chair after Christmas and thought “OK, I gotta write something to my list.” And her list-blob (that’s us) gets treated to a decidedly non-personal-sounding message.

When is it OK to address people as a group?

First Question: Ask yourself: Are you merely entertaining, or are you trying to do some heavy lifting of persuasion?

If you’re merely entertaining people, then don’t sweat it. One of the YouTube channels I regularly watch is Crazy Russian Hacker. Yeah it’s stupid stuff, but I’m strangely drawn to his colloquial English with a strong Russian accent. Not to mention how he blows %#@!* up.

He starts every video with “What’s up everybody, welcome back to my laBOREatory where safety is #1 priority….” No problem with addressing all of us as a group, because he’s not trying to convince us of anything.

Second Question: Are you vying for attention and need to be heard through the cacophony? Or do you have a captive audience? If you’re being inaugurated as President of the United States, then by all means start with “My Fellow Americans….” We all know you’ve won, you are addressing a few hundred million people, and there is no pretense of a conversation.

But if you are in a position where you’re trying to convert customers, one-by-one, then you should address them individually.

Third Question: Are you in a hotly competitive market? Because if you are, the chances are good that your competition is saying silly stuff like “Many of you may be wondering…”

You can get the edge on your competition by speaking directly to a single member of your target audience.

The great news is that your competition most likely will not have read this post, and will have no damn idea why your sales message is resonating better than theirs is.

You deserve to win in hotly competitive markets if you pay attention to the details that make the difference between a lazy general broadcast, and truly focusing on the individuals that make up your target audience.