(required final project for a senior-year class in 1980;
not actually delivered at Commencement) 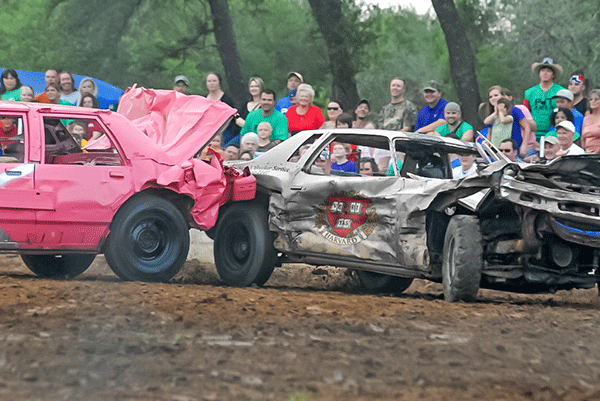 It is ironic that on this day, at the end of our undergraduate existence here, we should all be calmly sitting together in these peaceful surroundings, all dressed alike. It is ironic because this is the least-appropriate time in the four years we’ve been here that we should all assume such composure. It is ironic because it makes us appear that we have all come through unscathed and equally well in the 344th running of the Harvard Demolition Derby.

I first learned about what the Derby was like when a student who lived near me and who was a junior here at the time invited a few of us incoming freshmen over to fill in the margins of our Harvard brochures. After telling us for what offenses we could be kicked out of Harvard and how ghastly the food was, especially at the Freshman Union, she described life at Harvard. In the four years since that night, my recollection of this account has long since faded away–that is, all details of it except one. As clearly as ever I can remember her description of one fellow in her class. For months after he arrived at Harvard, he walked around agitated and bewildered. How long it took him to get over this condition she didn’t know; but she said it took him a whole semester to stop introducing himself by going “Hi, my name is Joe, and my SAT scores were….” That seemed pretty curious to me then. Now it sounds about right.

This poor fellow was an early casualty. Now, I’m no authority on this question of just what it is that causes people to flame out when they learn what Harvard is really like. The true authorities, bless their souls, are resting in peace now, if not in pieces. The causes are pretty clear, though. College is cracked up to be a place where you broaden your horizons. Where you grow in all directions. Where you sample different disciplines, learn about people, and discover the world around you. And Harvard is cracked up to be one if not the best college. But wrong to the outsider and woe to the student who draws the logical conclusion that Harvard is therefore the gas station to beat all gas stations for finding directions.

At Harvard, the pressure is on. But not in the interest of becoming a whole, well-rounded, total person. In the words of one friend of mine, who left Harvard not to return to finish her degree, Harvard is “only longitudinally oriented.” She elaborated that here the pressures are only on achievement, on concentration, on looking forever upwards to higher schools, and even more distant careers. Like a laser beam of light, it burns out that object immediately ahead while everything else remains dark.

Take for instance the field of concentration system here. The rule is that at the end of your freshman year, with 75% of your experience still ahead, you must decide on your concentration. And often a considerable part of that first year is spent fulfilling expository-writing and language requirements, with little time left over for trying various fields. Worse than this though, is the reality that if you want to go into certain fields like medicine, you had better know from day one that you do. If you don’t, you are told, your chances of getting into med school are gone. They’ve all passed you by.

Another aspect of Harvard that adds to the relentless pressure is the exam system. Virtually every other school in the nation starts classes earlier in the Fall and ends its semester before Christmas with the mid-year exams. In that system, vacation truly means vacation, relaxation and fun, for students and for faculty. But at Harvard, one’s vacation is often spent researching and writing papers, or studying for those tests given the week you get back, given just so that you don’t “lose your touch” with the material. And the meat on your Christmas turkey is still warm when you’re back at your desk, studying for the “Big Ones.” To top it all off, only a wheel of fortune decides how many days you have off between semesters, determined by your last exam date. In my case last term, I had a whopping 72 hours of intercession.

Oh yes, one other bit of useful information was given to me by my friend concerning what I would find at Harvard. She told me there is a rule that if your roommate commits suicide, you can apply for a postponement of your exams until the next semester.

When I think of Harvard, I often am awed by its proportions. It is simply big. Its endowment, its library, its resources all spell it. But big in this case often means overwhelmingly impersonal, too. One can easily get the feeling here that “my vote doesn’t count,” that one’s particular circumstances really don’t matter much. Two months after I entered Harvard, my mother died suddenly of a stroke. I went back home for a few days, but was soon forced to return to write my papers and take my exams. I came to the conclusion, though, that my priorities were now at home, so I decided to take leave spring term. I arranged to take courses at the University in my city, and for credit to be transferred here when I returned in the fall. I was also assured that I would be considered a sophomore for housing purposes when I came back. So I left.

Well, a few weeks after the freshman lottery that year, the dean’s office informed me that I was left out of the lottery, that I would have no choice as to housing, and was being assigned to a single room at Radcliffe. Moreover, I was told that I would have freshman standing for housing purposes upon my return, and that I wouldn’t even be able to apply for a housing transfer until later. Wait another year for the next lottery, they advised me.

The circumstances concerning my leave meant nothing. I could just as well have been returning from probation. This was, I was told, because if they made an exception for me, they would then have to do the same for all the people in my position. As far as I know, I am the first group of one. But the traditions of Fair Harvard must at all costs be preserved.

It is also somehow ironic that the life saver thrown to a drowning student in the Crimson-dark sea of Harvard is often cast by a fellow student. It may be in the form of someone sharing with you some advice, or a similar experience, or only maybe just being willing to join with you for a moment in banging heads against the ivy.

I will always be grateful to Mrs. Harry Elkins Widener for giving an endowment for the construction and maintenance of Widener Library. That resource is a source of pride for Harvard. But right up there with Mrs. Widener I must revere anonymous souls like the one who gave an endowment to Winthrop House for chocolate-chip ice cream to be regularly served to the students forevermore, because he missed that small pleasure himself. It is they who provide that extra push which often means the difference between surviving the Harvard Demolition Derby, and oblivion.